Everyone has a story to tell 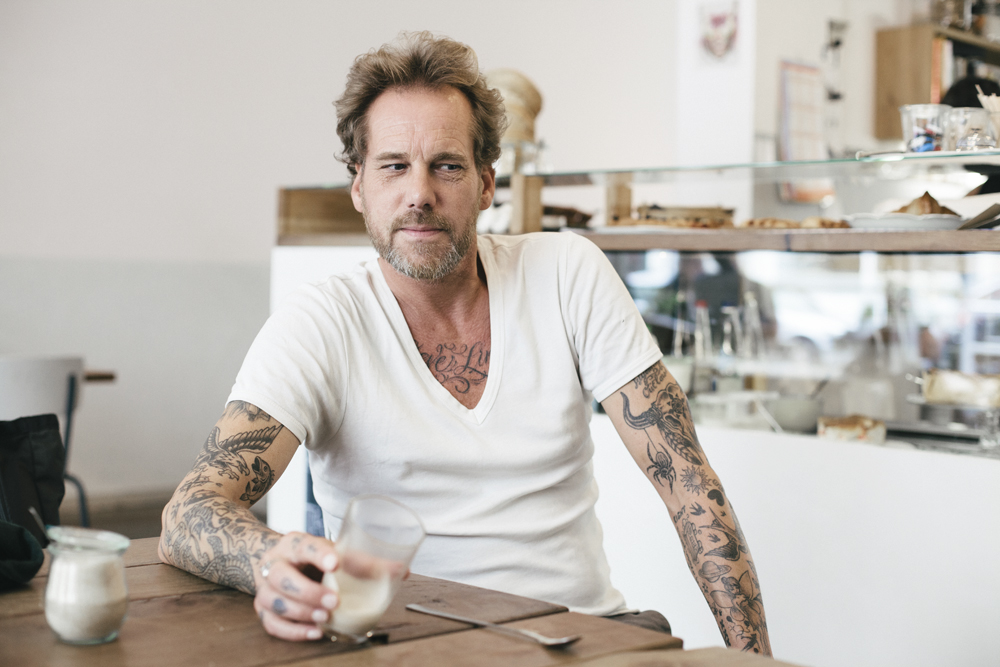 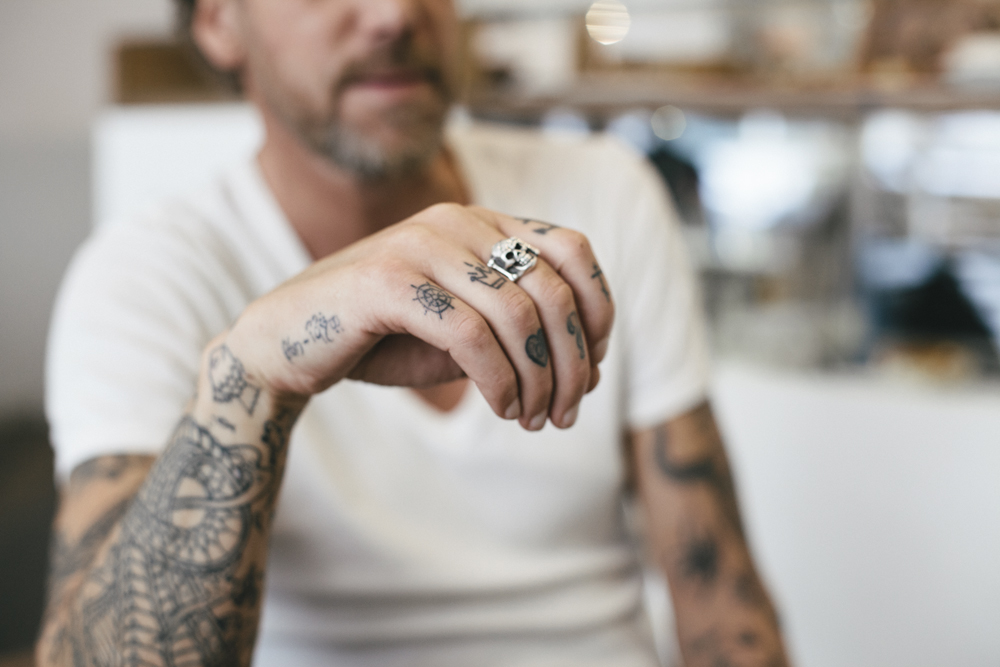 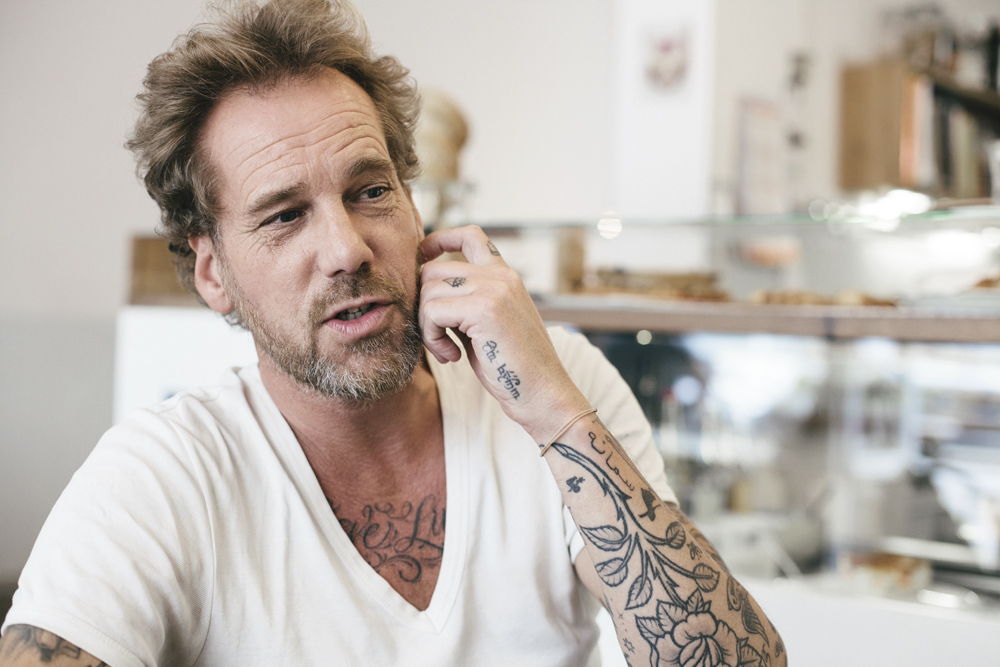 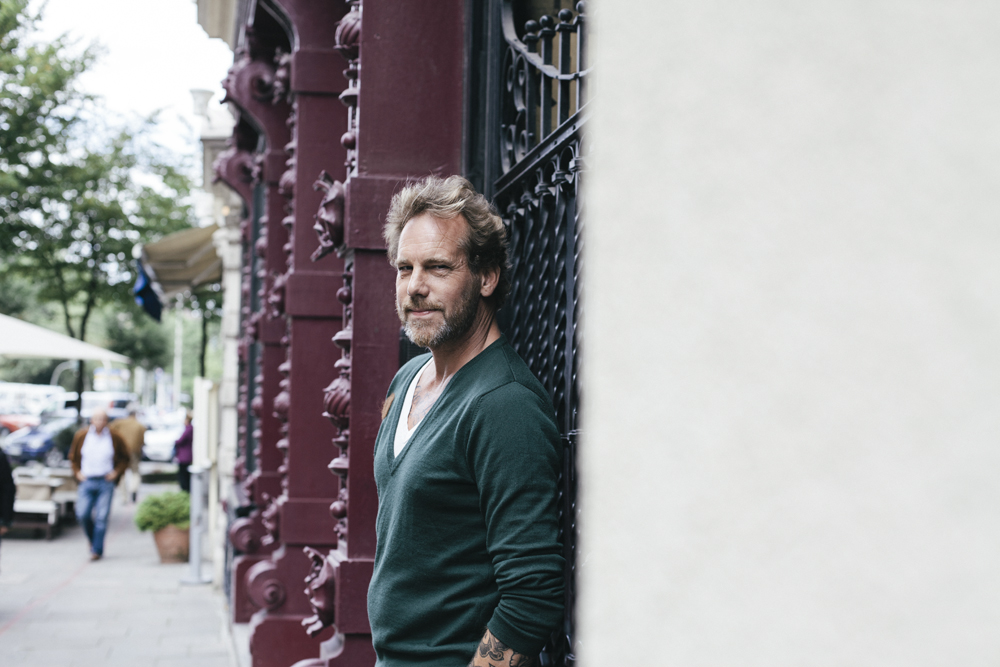 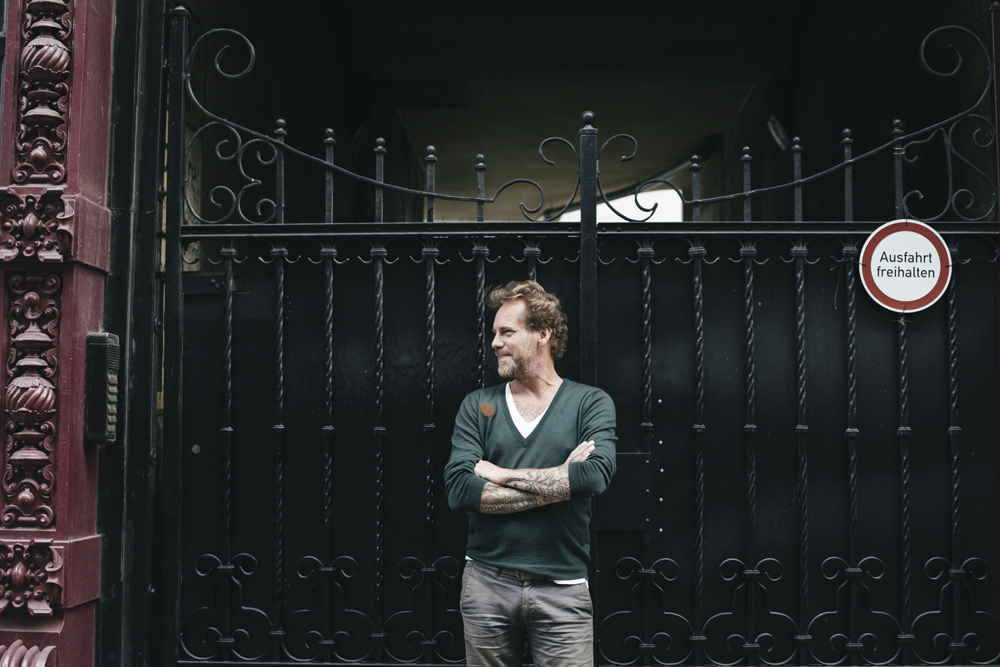 He is a traveller who wants to find the next chapter in his life. JAN KUIPERS, 40-something was born in the Netherlands. He worked as a cook, sold cars, became a designer, a businessman and eventually sold his whole life and girlfriend to another guy. This is his story.

A Friends Tale: Let’s start with your hometown, Leeuwarden. It’s situated up north in the Netherlands in the province Friesland. What kind of people live there?

Jan Kuipers: Frisians are very down-to-earth and easy-going people. They keep a low profile at first. Without being show offs and behaving like: „Look, here I am.“ As for me, I’m not a very good example because of my tattoos. Having tattoos makes you a bad guy in the eyes of decent frisian. That changed a lot in the last years.

When did you become an outlaw?

— I was 24 or 25 when I got my first tattoo: These two indians. They look somehow old. I got them up north in the Netherlands, together with a friend of mine, my former neighbor.

— Oh, I don’t know. I just choose them. I don’t need a special reason for a tattoo.

Indeed. Is there a reason why you have some equal tattoos on both sides of your body? Like these crosses?

— I am very much into symmetry. For me everything has to be symmetric. Have a look at my arms. The tattoos seem to be chaotic but if you look closely you see the harmony.

You have a tattoo of a knife. Are you a bad guy?

You are a chef?

— Yes. That’s my profession – in a way. But I did a lot of different things in my life. I always had a lack of education. I left school when I was seventeen and started working as a chef. I really learned it the hard way and finally got a diploma. After a while I made some money. And after I made a lot of money I started buying estate. At that time I was 26 years old.

How did you buy them?

— Well, I paid them. From my savings. I worked very hard and saved a lot of money. I had a regular job as a chef and besides that I established a catering business together with a friend of mine. We made a lot of money with catering. We found out that a lot of people wanted to have snacks and nice things for their celebrations. I mean, nowadays catering is very common but in the old days our competitors jn the business only offered boring bits and pieces. Besides that, I made some money with trading cars.

That sounds interesting. Can you tell us more about being a second-hand car dealer?

— Well, in those days you had to have a Golf GTI, a Ford Escort, the XR3i or a Peugeot 205 GTI. Those were very nice cars, very small but very nice. And in the Netherlands they were much more expensive than in Germany. So with another friend of mine I exported cars from Germany. If you bought a car below the price of 7500 guilder (that was prior to the introduction of the euro) you didn’t have to pay tax. You just imported the car and re-registered it in the Netherlands. We bought cars for 3000 guilder and we sold them for 4500 or sometimes 4600. So we made some money with that. We even published advertisements in the newspaper but after a while the dutch tax company started to keep an eye on us. So we had to stop.

What happened to the estate?

— The local government got in touch with me, because they had some plans with the land. I was the owner of the houses, but not of the land they were built on. But that was no problem. The houses were very old. I bought them for 36.000 guilder (around 15.000 euro) which was pretty cheap. I sold them for more than 80.000 euro. Both of them. After that I quit my job as a chef and started a clothing company.

So, kitchen, cars, estates and then clothing?

— Yeah. I was very successful in the clothing industry. I had several shops with export and import to and from Italy and Denmark. I owned the company for more then seven years. I sold it in 2005.

What kind of clothes did you sell?

— Fancy ones. Diesel for example. But you know, I found out that it is much better to produce your own shirts. So there is always someone in between. I produced, or better, somebody else produced my shirts in Italy. There I payed little money for high quality products. I bought them for 20 euro and sold them for more then 125 euro.

Wow. What was the name of your brand?

— Verso. And I have the logo as a tattoo here on my arm. Verso means „changes in life“. To start that business was a big change in my life. I became a business man with one of the first shops up north in Holland that sold fancy and also affordable clothes.

So why did you stop?

— That has something to do with a relationship. I lived above the store with my girlfriend. Unfortunately she found another man. Besides that, I saw the economical crises coming. Customers stayed away because I was too expensive. But I didn’t want to change the price or the concept. I wanted to stick to it. It was either the concept or nothing. And when my lady found this man I had a very good chance to sell everything to him because that guy had a lot of money. He bought my company, my house and everything.
I even sold him my wife. Kind of funny, don’t you think? Later I found out they had a relationship already for months. Shit happens. Now I know how things work. But I liked her and I was shocked when I found out that she had betrayed me. I was really sad about it.

Like: „You can have my wife if you take my shop as well?“

— Yeah. And there I was. Trying to find a new chapter of my life.

That was when the traveling started?

— Traveling is my method to find out about the next chapter of my life. I started last year in September and left to Iran. It was a 50 days trip. I bought a one-way-ticket and took the train via Istanbul. In Iran, they told me I need another ticket to proof that I would leave the country again. Otherwise I would get problems.

— Well, not problems. But when I arrived in Tabriz, entering the station, policemen were coming to me and I had to follow them. They asked me all kind of questions: Where are you from? What are you doing here? Why are you traveling alone. Stuff like that. After a while they set me free. It was a weird situation. On the second day, I was walking across a nice bazar — a very large one. Tabriz is very famous for its bazars. That’s why I went to this city. On this bazar an old guy came to me and asked me if he could help me. He wanted to show me around. I said: „Well, if you wanna show me around, please show me around.“ He told me all kind of things about himself. That he came from Armenia, and lived here and there. It was nice, but I had to catch the bus in the evening and I had to go back to my hotel. The guy said, no problem, I’ll bring you to your hotel. And he went along with me to my hotel. Believe me, in this moment I was not aware of it, but what the fuck. He did know where my hotel was although I didn’t tell him. I never disclosed his secret.

— Yeah. But okay. I went to Ardabil and I arrived at around ten o’clock at night. I was walking around to find a hostel. I picked two hostels from the Lonely Planet. One of them was occupied. The other one took no foreigners which I couldn’t believe. I thought maybe they don’t wanna have me because I have to many tattoos. So after these two hostels I was already stressed out because I didn’t know where to go. And again there was a guy who wanted to guide me to another hostel but after a few steps two policemen stopped us and brought me and the guy to a small policestation. It was nearby and they interviewed me again. They asked me the same questions as the police in Tabriz. But I asked them: „What’s the thing?! I have a visa and what is this all about?“ They told me: „Well, it’s not about you. We take care of your safety. And we take care of you because you’re up in northern Iran and maybe there are some people who want to hurt you. Who try to take advantage of you. „Yeah, that’s a bullshit-kind-of-a-story of course. The other guy who was trying to help me, said he had to go. He said his mother called him to say that she’s ill. Bullshit as well. So I was back in the streets, all by myself. And then this guy, Sasan, came to me and he saw that I was stressed out. I also didn’t know him before, I met him on the street. But he called his father and they took me to their home. Later we had a lot of adventures and fun together. He became a really good friend of mine.

Wasn’t that a bit naive?

— Yeah, it was, but it turned out to be the right thing to do, cause I finally met a new friend.

Are you always that kind of impulsive?

— Well, sometimes I am. In a hostel in Georgia I met a guy from Iraq. He lived in Morocco for a year and he told me: „You have to visit Morocco.“ So I said, „You think I have to go to Morocco? Okay.“ And I took my iPad and booked the flight. 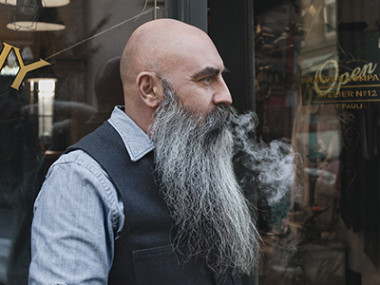 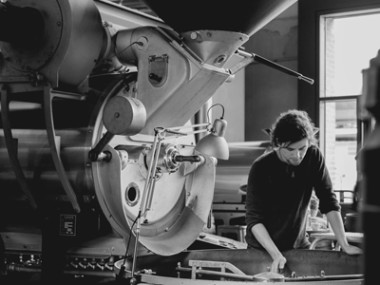 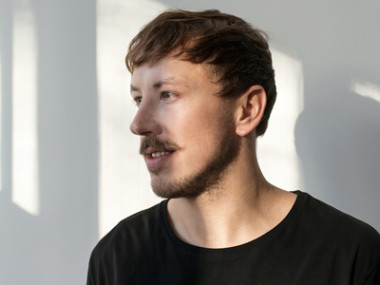 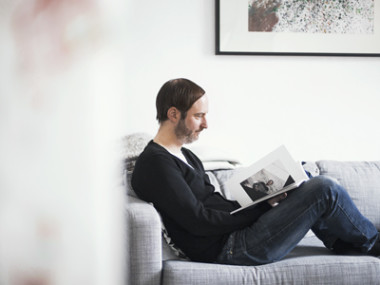 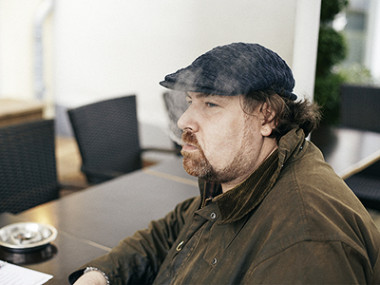 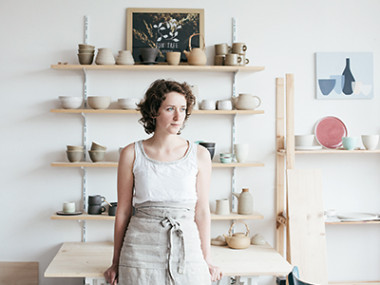 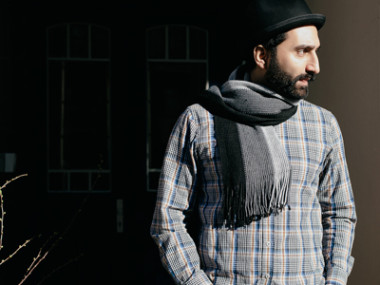